Does this video show a massive dire wolf? 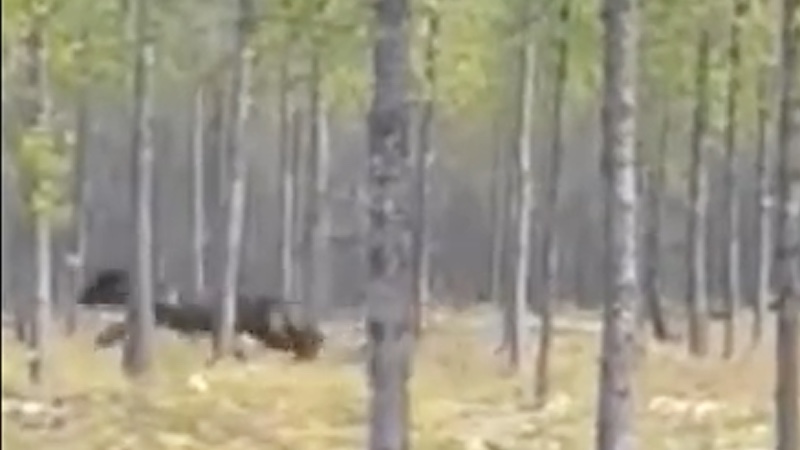 Does this video show a massive dire wolf?

A video was uploaded to YouTube this week that depicts what some are calling a massive dire wolf.

The video was uploaded to YouTube by user Nv Tv, who said that the sighting occurred in the United States on October 1, 2015. The story that the uploader tells is that he was outside his house with his dog. The massive wolf came near and the dog started barking at it. Then, the wolf did an unusual thing. It pretended to run away from the dog, which prompted the dog to chase it, before turning around and chasing the dog.

Because some commenters mentioned the “original video” in the comments, strangerdimensions.com did some investigating and found the original video and story. The original video is, in fact, from October 1, 2015 and was posted by user Deep Bush Survival. It was taken in Saskatchewan and the massive wolf creature had been appearing for days before the video.

Part of the story is the same: the dog did bark at the massive wolf creature, which apparently agitated it. But, then the wolf picked the dog up and threw it in the air, much to the shock and horror of the dog’s owner. One of the other guides that was with him fired a rifle into the air several times and scared it off. The wolf creature did return a few times after that, but it didn’t harm the dog any further.

Because of the video’s popularity, people are starting to speculate on what the massive wolf creature could be. One of the most popular theories is that it’s a massive dire wolf, an extinct species of wolf that are believed to have died out around 9,440 years ago.

Another popular theory is that it could be a Dogman, a legendary cryptid that is similar to a werewolf, sometimes appearing to have a man’s body and a dog’s head and other times appearing as a massive wolf. They’re reported mostly in Michigan and Minnesota, but there have been lots of Dogman sightings reported in various parts of the United States.

For now, we’ll just have to wonder what this massive wolf creature is and where it went.