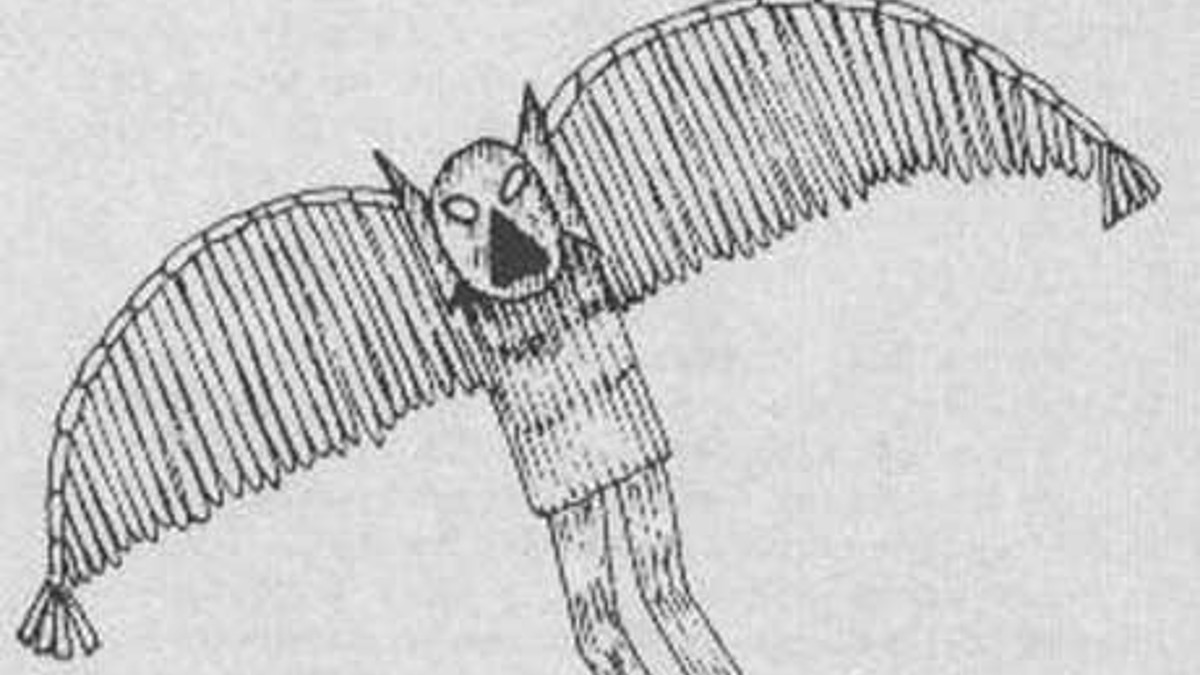 The Owlman is, as you would expect, a hybrid of man and owl and is said to frequent Cornwall, England.

There have been sporadic sightings of a hybrid bird/man creature in a secluded woodland and a nearby churchyard starting from 1926 up until the most recent sighting in 2019.

Some researchers believe he was created as a counterpart to the USA’s Mothman. A supervillain of the same name also appears in comic books published by DC Comics.

Unlike the vast majority of cryptids, the Cornish Owlman has no lore or legend attached to him and was said to have been seen in a specific area for only a short period of time.

The creature was mostly seen from 1976 to 1978, and a number of the sightings appear to have been made by adolescent girls.

From eyewitness accounts, Owlman was said to be around 6 feet tall with glowing red eyes and made a hissing noise. He is sometimes seen flying, which would appear to rule out the theory that he is a man in a costume.

As more sightings were reported, more details of Owlman emerged. He was said to have pointed ears, clawed feet, and was partially feathered, with the feathers a silvery gray color.

The purported sightings of Owlman took place at a time when Cornwall was seemingly experiencing a very strange time in its history.

Some believe Owlman was an alien of some kind or possibly a pet that had escaped from an alien ship.

As well as all this, Mawnan Old Church, where Owlman was frequently seen, is on a ley line —ancient ‘paths’ connecting prehistoric or ancient sites of cultural significance — fueling the whole debate about what caused the strange events and where Owlman came from.

In the DC Comics, Owlman was created as an evil counterpart for Batman.

Many people have said they have seen Owlman in Mawnan Woods or the cemetery at Mawnan Old Church in Cornwall, England.

The small churchyard at Mawnan sits down a long narrow, secluded lane and has been a sacred place since at least the 13th century.

Although Owlman was mainly active from 1976 to 1978, sporadic sightings have been reported since. And the very first possible case came in 1926.

In 1926 a local newspaper reported that two boys had been attacked by a large ferocious bird in the Mawnan Woods and had had to take shelter behind a large steel grating. However, the authorities largely put the boys’ experience down to an over-active imagination.

But then the Owlman returned on April 17, 1976. Two girls, June and Vicky Melling say they saw a feathered birdman hovering over Mawnan Old Church. They were so shaken by their experience that the family cut their holiday short and returned home.

Sally Chapman and Barbara Perry had an encounter with Owlman in July of the same year while camping in the woods near the church. They related their story to Tony Shiels, who had already written about June and Vicky’s encounter and who may have coined the name Owlman, and said that they initially thought it was someone playing a joke on them.

However, as they approached the figure, it launched itself up into the air and the girls screamed. Apparently, it had a horrible owl-like face and big red eyes. They noted its gray wings, black legs and large mouth.

A further sighting was made by a Miss Opie two years later. She saw a monster-like figure flying through the trees near Mawnan Old Church.

Shortly afterward, three French girls attested to seeing the creature. Their landlady contacted Tony, who tried to speak to the girls about their experience. Sadly, the girls did not respond to Tony’s request.

The Owlman sightings are, perhaps slightly suspiciously, linked to Tony Shiels, who actually came in for a lot of media criticism. He maintains the accounts are real, and he has nothing to do with the sightings.

June Melling and Barbara Perry, and Sally Chapman created sketches of the Owlman, but there is some suspicion that Tony, a professional artist, may have made the drawings himself.

The girls had written descriptions under the drawings, but similarities between Perry’s and Chapman’s handwriting were noted, leading some to suspect the same person had written them.

There are, however, several other accounts that do not involve Tony. The first account comes from Gavin and Sally (not their real names), who described seeing a creature standing on a branch of a tree. This creature had wings, black legs with high ankles, and was gray in color. They also remember its glowing eyes.

The creature saw them and began to move its head backward and forward before lifting its wings and jumping back. As it did so, its legs folded up. At this point, Gavin and Sally turned and ran.

Intriguingly, Gavin and Sally’s encounter was in 1989, some years after the initial spate of reports. A further report was made in 1995 by a marine biology student who preferred to remain anonymous. The student’s description tallied with all the previous reports.

In 2000, loud owl-like screeching could be heard coming from a church graveyard in nearby Mullion, which some attributed to the Owlman.

Cryptologist Jonathan Downes also reported meeting a man who claimed to have seen the Owlman when he was a kid. The man produced a sketch of the creature, but Downes remained skeptical that the observer hadn’t just copied an earlier sketch.

In 2014, Scottish filmmaker Lawrie Brewster set up a prank in St Mary’s Hospital near Kirkcaldy, Fife, Scotland, where he filmed urban explorers having an encounter with ‘Owlman,’ who was actually a person dressed in a papier-mache suit.

However, the possibility of an Owlman haunting Cornwall reemerged in 2019 with the most detailed sighting to date.
Ghosthunter Mark Davies and his friend, Chris Power, were attacked by a strange creature in the Mawnan churchyard.

Davies told local media that he heard a “hissing in the trees” and could hear “flapping” before something flew over his head. He then claimed to have seen a demonic-looking figure with horns on its head.

The ghosthunter had a meter to pick up electric magnetic energy used for detecting ghosts, and he said it began picking up readings when the Owlman appeared. Power did not see the creature, but he felt a surge of energy and received scratches on his arm.

After speaking with Davies, a reporter for the local Cornwall Live visited the Mawnan church and described it as a spooky location with tons of history. They reported spooky handprints on the door of the church as if people had been clawing to get inside to escape the Owlman.