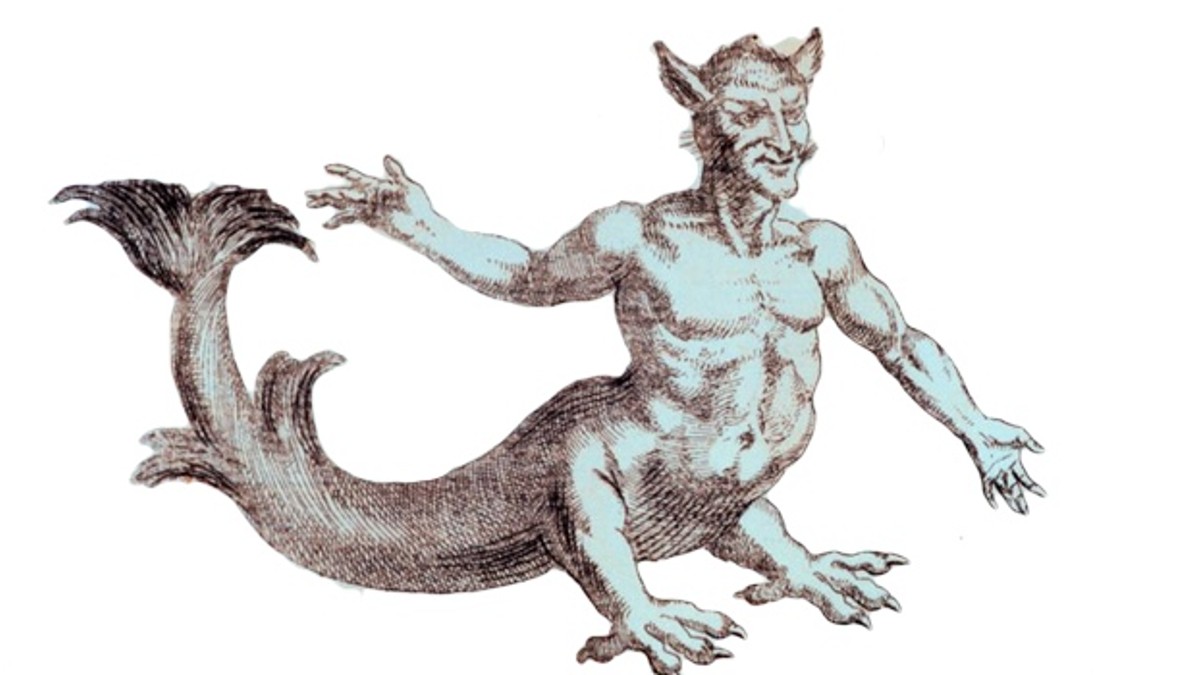 Mermen are sea spirits and, physically at least, the male equivalent of mermaids. Collectively the two creatures are often called Merfolk.

The Merman legend dates back thousands of years and has been spotted in various forms and in many cultures across the world.

Depending on which stories you read, Mermen are either benevolent, neutral, or malevolent. The legends are sometimes intriguing and sometimes frightening.

Mermen were a part of the lore of many civilizations, including Greek, Sumerian, and Nigerian. Gods such as Triton, Glaucus, Enki, and Olokun were prominent in the mythology of their respective cultures.

The earliest recorded Merman was the Babylonian sea-God creature known as Ea, who dated back to nearly 4000 years ago. Ea (or Oannes in Greek) was described by the ancient Greeks in 200 BC as having the body and head of a fish but was also equipped with human features underneath his fish features. A bit confusing, we know.

However, another source for the Babylonian sea-God did describe Ea as having a bearded head, while the rest of his body resembled a fish.

Archaeologists have found carvings of Mermen that date back to before written history, which just shows how long we have been fascinated by this mythical creature.

Mermen, according to some legends, were said to wear red caps on their heads – these caps gave them the ability to breathe underwater. If a Merman lost his cap, he would be unable to go back to his home in the sea.

One of the Merman’s weaknesses is alleged to be silver; if one cast silver in front of a Merman he would be confused and distracted.

Stories of Mermen in the medieval ages portrayed them as rather nasty creatures. Mermaids were thought to sometimes seek a human mate because the Mermen were so unappealing.

Mermen have a violent history

Mermen have been accused of summoning up storms, sinking ships, and drowning sailors, along with other disasters at sea.

Other stories tell of Mermen coming ashore and kidnapping human females, marrying them against their will and taking them back to sea. These women would be enslaved for eternity.

Another dark legend relating to Mermen is that they would imprison the souls of dead sailors and keep them at the bottom of the sea, meaning the souls were unable to pass over to the other side.

Mermen were also supposed to be able to lead souls to the other side, but apparently, they did not always treat souls kindly…

Conversely, there are also tales of Mermen saving drowning people and returning them safely to shore. Other tales give us the idea that Mermen could guide humans – helping them to stay away from the dangers of the sea.

Mermen appear in many cultures across the world

Japanese legends tell of a creature called a Kappa, which seems to be their version of a Merman. The Kappa inhabits lakes, coasts, and rivers and is described as a child-sized creature.

The Kappa is more animal than human, as it has a monkey face and a turtle shell on its back. The creature likes to challenge humans to high-stake games in which losing can mean death. They also like to eat children and, oddly enough, cucumbers.

In west, south, and central Africa, a creature called the Mami Wata, which translates as Mother of the Waters, is thought to be an equivalent to the Merfolk.

In the second half of the 12th century, a man from the sea was said to have been captured in Suffolk, England, and held captive in a nearby castle.

His captors held him for six months before he finally managed to escape and return to the sea.

Apparently he did not say a word to anyone while he was a prisoner and seemed to prefer fish over any other type of food.

A figure was spotted off the coast of Moray, Scotland, in August 1814. This figure was known to locals, and it was thought that seeing it was a bad omen.

On this particular occasion, two fishermen managed to get a good look at the figure, describing it as black, with curly hair and unusually long arms.

In 1872, or thereabouts, Henry Reynolds saw what he first thought was a pale-skinned teenager on the coast of Castlemartin, Dyfed, Wales. He thought little more of it until he saw the figure had a brown tail that started to swish back and forth.

The body and the arms apparently looked human, although the arms and hands were shorter and thicker than they would usually be, and the creature’s nose was long and sharp.

Henry went in search of other people to corroborate his sighting, but the creature had disappeared by the time he returned to the spot.

A number of Merman sightings were reported in Coney Island in New York in 1885. The creature was described as having long hair that reached down to its waist, and long hair on its body.

The creature was seen for about ten days, moving around in the water as if it were its natural environment. No one was able to successfully approach the creature, for it would leap into the water each time someone ventured too close.

A video surfaced in September 2015 which appeared to show a Merman being carried up a hill and being handed over to paramedics.

The video was filmed in Poland and the figure is human-shaped with a fish-like tail. It is unclear if this footage has any credibility – it could be a scene for a movie or it could, of course, just be a hoax.

In April 2022, Chicago-based journalist, Robert Loerzel, tweeted a picture of the skeleton of a strange creature he found on the shoreline at Montrose Beach. The giant fish-like skeleton appeared to be around the height of an average human, which led to some speculation that it might be a merman.

Loerzel posted the picture on April Fools Day, so there’s a good chance it might be a hoax. However, the journalist did post several follow-up tweets over the next couple of days that implied it was not a joke and that he was still trying to figure out what on earth the thing was.

I found this, um … THING at the Montrose Beach Dunes.

And I thought: Well, I guess that’s some kind of fish. But WTF is it? … pic.twitter.com/YOtXkGtxij