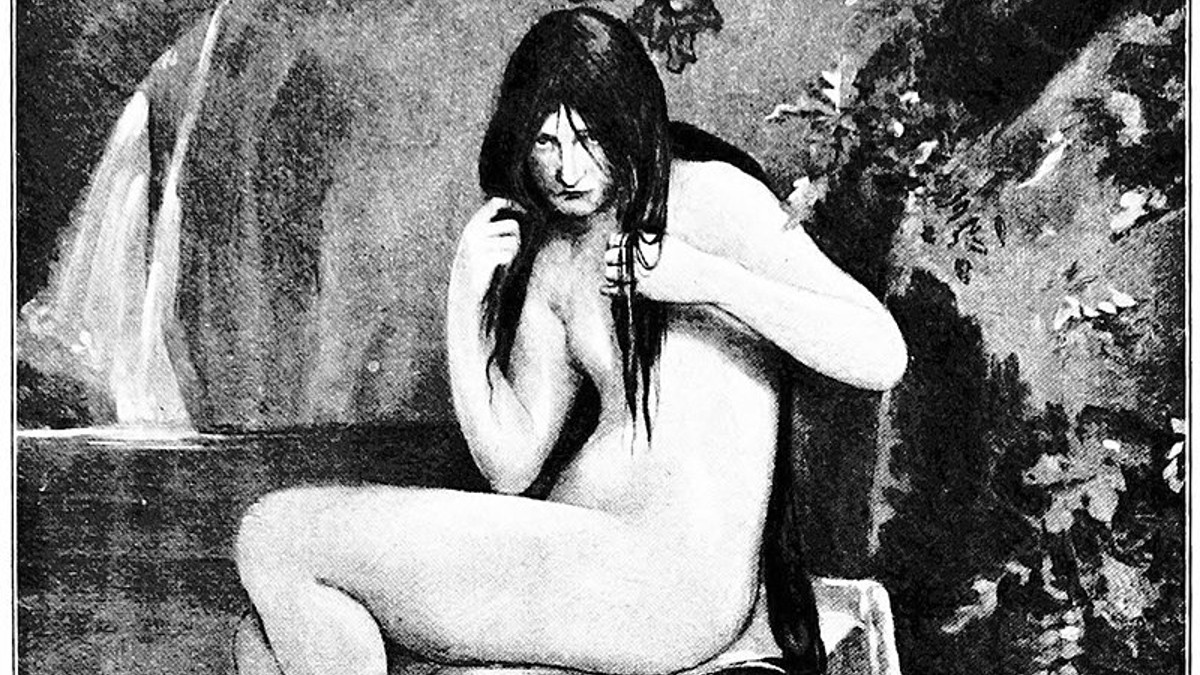 The Kelpie is a legendary shape-shifting spirit said to dwell in the lochs and rivers of Scotland and lures people into the murky depths.

The creature most often takes one of two forms, that of a human woman or a horse.

The Kelpie (an Each-Uisge in Gaelic) is most regularly said to appear as a white or gray horse but can also take on the form of a human.

Kelpies are often said to differ slightly from horses in that they have webbed feet instead of hooves and can have webbed ears too.

Their skin is described as being smooth and deathly cold, while their hair is sometimes said to be made of seaweed.

Legend has it that a Kelpie would drag people down below the water, drown them and then eat them.

Some stories allege the Kelpie has an adhesive skin, meaning that you could get stuck to it and be unable to break free. As the Kelpie’s tail hits the water, it is said to make a sound like thunder.

And like many other water-dwelling mythical monsters, the Kelpie has the ability to summon up a storm to bring sailors down to a watery grave.

Kelpies are thought to have shapeshifting abilities and are often said to appear as attractive humans in order to lure their unsuspecting prey toward them.

There is some debate over whether or not the Kelpie is a malevolent beast. Some stories portray the Kelpie as being a mischievous but ultimately harmless creature, while others paint a picture of a vicious, murderous entity.

The darkest version of the legend presents the Kelpie as a terrifying black beast connected to the Devil. It is supposed to have two very sharp horns growing out of its head.

Another form the Kelpie is alleged to take is that of a hairy human. In this form, the Kelpie can rush out of the water and grab passersby, crushing them in its vice-like grip.

Apparently, the only way of defeating or taming a Kelpie is to remove its bridle. If you can do that, the Kelpie will submit to your will. These Kelpies were historically said to be held in high regard, not least because they were meant to have the strength of ten horses.

There are rumors that the MacGregor clan are the holders of a Kelpie bridle.

Kelpies have been said to mate with normal horses. The product of these unions is apparently always a black horse that cannot drown. This offspring cannot transform its appearance and does not have the desire to eat human beings.

The legend originated hundreds of years ago. Many Scots at this time could not swim, so it is thought that the legend may have started in order to try to keep children away from the water.

One folk tale tells the story of the Kelpie and ten children. The horse-like creature, having already rounded up nine children, all placed on its back, is chasing a tenth child.

This tenth child strokes the Kelpie on the nose only to find their finger has become stuck. They are forced to cut their finger off before running away to safety. The water horse then vanished into the water with the other nine children.

The Kelpie was immortalized by statues recently erected near Falkirk, Scotland. At 100ft tall and weighing 300 tonnes each, these are the biggest equine sculptures in the world.

They were built in just 90 days and are made from stainless steel with steel-reinforced concrete foundations.

The legend of the Kelpie has also traveled south of the border to the Yorkshire Dales in northern England, where two Kelpies allegedly took up residence, one by the River Ure and the other by the River Strid.

These Kelpies reportedly emerge from the river at nighttime, hoping to find a weary traveler or child that will jump onto their back.

This English Kelpie can be black or white and seems less likely to assume human form, but skeptical travelers should check out the feet, as this Kelpie’s feet appear human.

Accounts of particular sightings are very hard to come by, and modern-day sightings seem to be non-existent. However, we did find a record from the 19th century.

Father Allan McDonald, a priest in South Uist in Scotland, recorded an account by one of his parishioners. It was June 1893, and Ewan MacMillan was out looking for a mare and foal that belonged to him.

Walking over to a nearby loch, he saw an animal that he assumed to be the mare. As he got closer to it, it appeared to him to be larger than a normal horse.

When he was within 20 yards, the beast emitted a hideous, bone-chilling scream that terrified not only Ewan but also the nearby horses. The horses fled, as did Ewan, not stopping until he was back home.