‘Fleet’ of six UFOs witnessed in skies above Chile 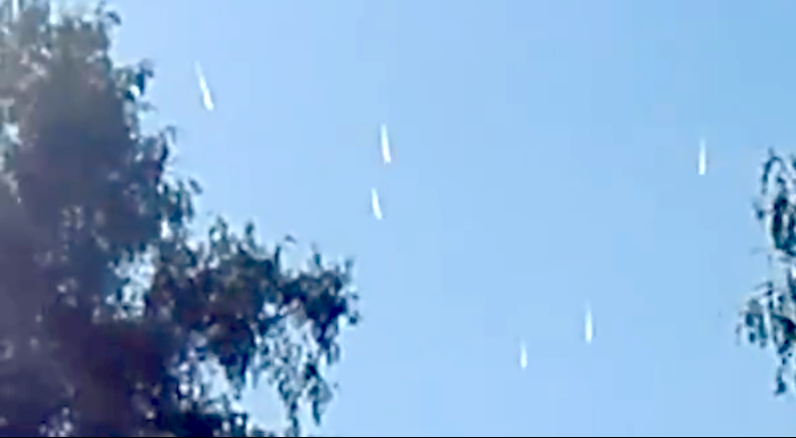 The mysterious UFOs seen in the sky over Chile

Six UFOs have been captured on video in the skies above Las Cabras, Chile.

Footage of the bizarre event was uploaded to YouTube by user Elizandro Antonio. In the video, you can see the objects enter the atmosphere and slowly fly down towards the Earth.

As they’re moving, they appear to be followed by trails that look fire or smoke.

Some claim the UFOs could be part of a meteor shower, but others have suggested the trails could be some sort of exhaust fumes, chemical agent, or possibly steam being emitted as the objects entered the atmosphere.

What we do know about the trails is that they gives a clear indication of where the crafts came from, and in what direction they were going. They came from outside the atmosphere and were heading down to Earth.

The video, which can be viewed below, is short but concise and captured exactly what the witness was seeing.

This isn’t the first time a UFO has been seen in Chile. In fact, Chile is right at the top of Forbes’ list of “The World’s 8 Best Places to Hunt for Extraterrestrials and Search for UFOs“.

Chile is often noted as being the country with the most UFO sightings. With little pollution, low humidity and very high ridges, it’s become one of the favorite places for UFO-seekers to visit.

There are so many UFOs in Chile that the government created the CEFAA (Committee of Studies of Anomalous Aerial Phenomenon), which looks at Unidentified Aerial Phenomenon (UAPs) and is run by the Chilean Air Force.

Chile is also home to one of the world’s best astrological observatories, the Paranal Observatory, which is outfitted with nifty technology such as the Visible and Infrared Survey Telescope and, our favorite in terms of names, the VLT (Very Large Telescope).

One question that the large number of sightings brings up is whether there are actually more UFOs in the skies above Chile, or whether it’s just because so many people search for UFOs there.

Whatever the answer is, we’ll keep watching the skies and the web in search of more interesting videos like this one!