Woman dumps boyfriend because ghost followed him home from exorcism 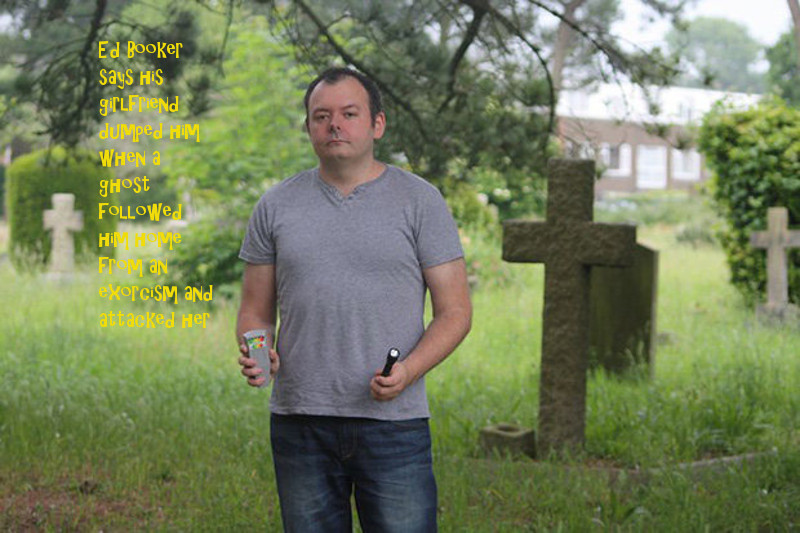 A man from Worthing, West Sussex, in England says his girlfriend dumped him after he performed an exorcism and a ghost followed him home and attacked her.

Ed Booker, 37, is part of a ghost-hunting/paranormal investigation group who went to clear out a home in Horseham, West Sussex. The home had been reportedly full of negative spirits and energy that were tormenting a teenage boy and the family there. During the course of the investigation, the team performed an exorcism. He told the Channel 4 docudrama, True Horror, that when they entered the house to perform the exorcism, it felt so wrong that even skeptics in the group didn’t want to go in.

Following the exorcism, he says that one entity followed him home. He describes the entity as being a 7-foot tall circus ringmaster, dressed in black with a top hat, “dirty, broken teeth” and resting a shovel against his shoulder.

He took a photo in which he says the “ringmaster” can be seen. Aside from photographic evidence, Booker has been experiencing a plethora of unusual events. He says his health is rapidly declining, he’s woken up with scratches on his arms, and he’s afraid to sleep in his bedroom due to the ghost activity. One day, he noticed that the word “DIE” had been written on one of his windows, from the inside.

Even more unsettling is the fact that the entity appears to have attached itself to him, and it’s violent. Booker says that he’s depressed when he’s in the flat, but that it’s alleviated some degree while he’s outside it.

However, he’s been told that the spirit is attached to him, not the flat. Mediums who have come in have been attacked. But, the final straw for his girlfriend was when she was attacked and pinned down by the ghost. Booker says that’s why she dumped him. He says he feels as though the ghost is ruining his life.

While this headline seems funny, the reality here is very sad. Barry Guy of Ghostfinder Paranormal Society has said that Ed should get professional help, such as that from a medium or priest. He says “Demonic entities are tough to get rid of. It sounds like he needs an exorcism himself.”