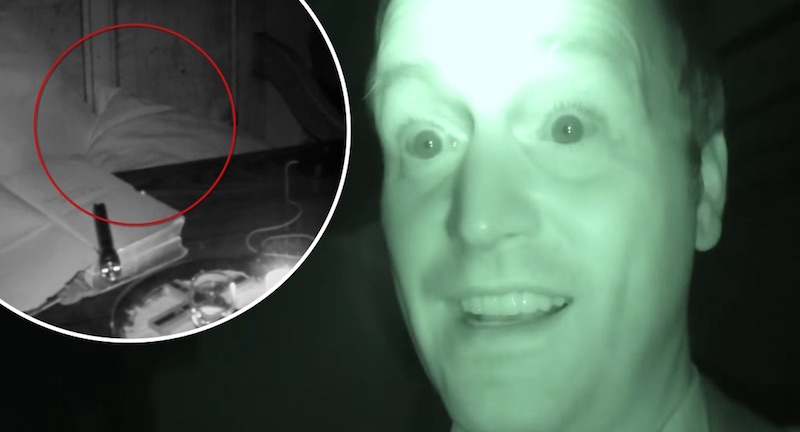 Sean Reynolds during his investigation and, left, the cushion that moves on camera

Startling footage has been captured of what a paranormal investigator believes is a ghost moving a cushion and bible inside a historic pub.

Sean Reynolds, 34, filmed the footage while doing research in the 220-year-old building for his paranormal series Ghost Dimension, which he streams on Amazon.

The video shows him inside the tavern after he set up sensors to pick up energy in one of the rooms.

A camera filming a table then captures the moment a cushion appears to move by itself. The page of a bible is also captured rustling on its own.

A tapping noise can be heard, apparently in response to questions he asks while trying to communicate with the purported presence. At one point, Reynolds also says he feels a brush of cold air go past him.

Reynolds believes the ghost is that of a former landlady of the Owd Betts pub, where the filming took place, and the cushion moved because she was sitting down for a drink. The tavern in Rochdale, England, first opened back in 1796.

See the dramatic moment unfold in the video below, and let us know what you think in the comments.