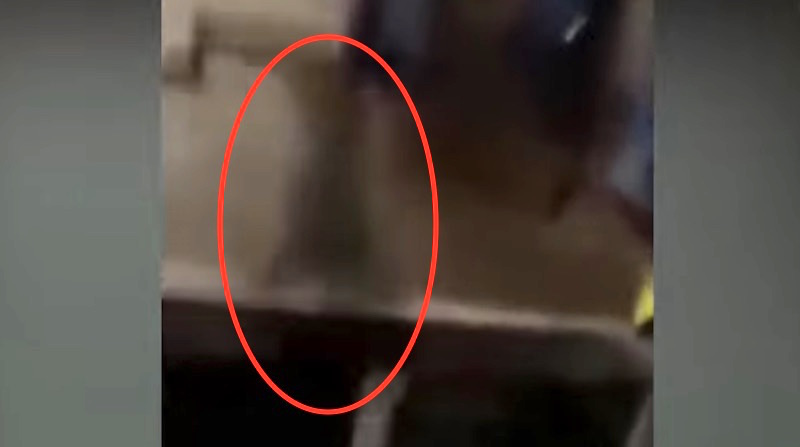 Raul Aruello was a night security guard at a soccer stadium when he unwittingly captured what appears to be a ghost on camera.

He started recording after hearing a banging noise coming from downstairs while the stadium was empty, and said he wanted to take footage of the strange goings on so that people would know he was “telling the truth“.

In the footage he then proceeds to go into ghost-hunter mode, walking downstairs armed with a cell phone and flashlight. The noise sounds like a door banging, and is coming from the changing rooms.

Once he rounds the corner, it’s pretty apparent what’s making the banging noise. The door to the changing rooms is being very forcibly flung open and shut by something inside the room.

Even though Aruello is very visibly scared, doing things such as cursing his luck because he’d had to go investigate this situation on his own, he flings open the door to reveal that no one is there.

He says this has been the third time he’d done this — heard the noise, opened the door and seen no one there — and asks “how can nothing be doing this?”. The short answer is, of course, that it wasn’t “nothing” doing it. Something MUST have been causing the door to bang.

As he’s panning the camera around, he then catches what appears to be a dark, ghostly figure darting along the benches which hadn’t been visible to the naked eye. Aruello only noticed it upon reviewing the video later.

There is actually a theory that says ghosts and spirits can’t be seen with anything using the visible light spectrum, but only infrared or ultra violet lights. That’s why many paranormal investigators, such as Zak Bagans from Ghost Adventures, use and swear by full spectrum cameras.

Married father of two Aruello says he was so unnerved by this event that he put in his resignation from the Tomas Adolfo Duco Stadium in Buenos Aires, Argentina, and obtained a different security job.

What do you think of the unnerving footage? Let us know in the comments below!