Lulworth Cove is in Dorset, England, and has many paranormal legends associated with it.

Known as one of the most haunted places in England, Lulworth Cove has a long history. Tales of the paranormal date back hundreds of years.

Lulworth Cove was formed 10,000 years ago (after the last Ice Age) by meltwater and is continuously evolving as the sea still erodes the softer rocks behind the hard headland. Some of the rocks are 60 million years old, while others are 150 million years old (hence the area is also called the Jurassic Coast).

Fishing was the lifeblood of the community for many centuries, but fish stocks dropped at the end of the 19th century and this almost killed the fishing industry. Fishermen still trawl the waters today, but the industry is a shadow of its former self.

A whale entered Lulworth Cove in 1785, but managed to escape despite the locals trying to kill it.

The area is a favorite of geographers and walkers thanks to its incredible landscape and hills, and the Natural World Heritage coastline.

Napoleon on the Beach

A figure who looks very much like Napoleon is said to appear with a second man on the beach at Lulworth Cove. He unfolds maps and has a discussion with the second man before disappearing. It is said that Napoleon considered Lulworth Cove as a potential place to land his troops in preparation for an invasion…

A Light at Lulworth Castle

From the 1500s to the 1800s, a strange, eerie light could be seen at night in one of the rooms in Lulworth Castle. The room was eventually pulled down and rebuilt, but the mysterious light still radiated from it. It is not known who or what created the light.

When Lulworth Castle was burning to the ground, the servants managed to get out. They met at nearby Durdle Door by the sea but, sadly, the sea claimed their lives. Many people have said that they could hear voices there – desperate people crying out and screaming.

Ghostly dancers could sometimes be seen during World War II. This was when the area was littered with mines and barbed wire, which made it impossible for anybody to set foot there, let alone dance around.

There have been multiple sightings since then, including a sailor who reported seeing the group of dancers appear from the sea, dance for a while, and then disappear back underneath the water.

Some think that these young women are the servants who died after escaping from the burning castle.

Local lore suggests that a black dog haunts Lulworth Cove. It is thought that this dog is a shuck, but very little is known. A shuck is generally said to be an apparition, but is also associated with the Devil and hellhounds. A shuck usually has glowing eyes and is thought to be a sign of impending death.

Following his wife’s death, a farmer was haunted for days by a ball of light. He believed the ball of light was his dead wife. On giving away his wife’s possessions, the haunting ceased. Recently, there have been reports of a phantom elderly lady. Could this be the farmer’s wife?

A Roman army is alleged to haunt the hills, continuing its ghostly march around Lulworth Cove. Over the centuries, the area has been the scene of many a battle, so could there be other armies roaming around?

A Bronze Age burial mound dates from 1900 BC, and an enormous Celtic hillfort has been dated to around 400 BC. A Roman grave was unearthed on a nearby farm, with the grave being dated to the first century AD, so there could be any number of military ‘ghosts’ around Lulworth Cove.

Paranormal investigators have captured what they say are real EVPs at Lulworth Cove.

How to find Lulworth Cove 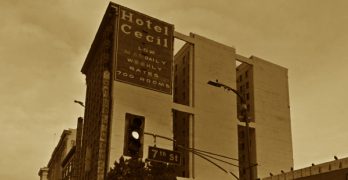