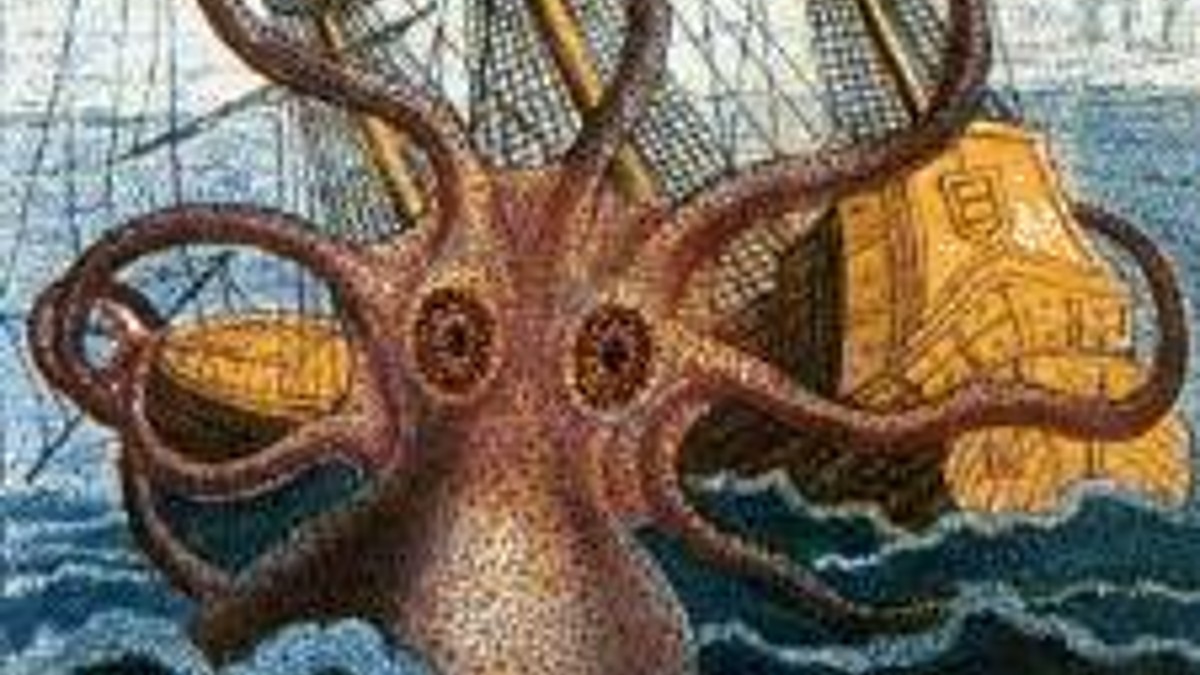 Kraken are legendary, enormous sea monsters supposedly living near Norway, Iceland, and Greenland. However, sailors have been telling tales of the mysterious Kraken all across the globe for centuries.

Kraken are described as huge sea monsters with many tentacles. Sailors have reported sightings of Kraken for many generations.

These legendary sea beasts are alleged to live off the Norwegian and Icelandic coasts and are also said to live around Greenland. They are supposed to live deep down in the ocean, yet there are tales of Kraken rising to the surface and attacking ships.

‘Kraken’ is a Scandinavian word and means an unhealthy animal or something which is twisted. In German, the word ‘krake’ (the plural being ‘kraken’) translates as octopus, but can also be used to describe the legendary Kraken.

Although Kraken have been likened to squid and octopuses, they are deemed to be much larger than either of these creatures. The legend of the Kraken may have started with sightings of giant squid, which are themselves known to grow to around 13 to 15 meters in length (tentacles included).

Many early alleged sightings of Kraken seemed to portray it as being more crab-like than anything else, seeming to possess traits similar to those of large whales.

The name ‘Kraken’ does not appear in the Norse sagas of yore, but texts from around 1250 describe giant sea monsters. In the 18th century, Erik Pontopiddan, the bishop of Bergen, in his book called Natural History of Norway, described the Kraken as being “the size of a floating island.” He also declared that it was an aggressive, powerful creature capable of dragging ships down to the darkest depths of the ocean.

Tales of the Kraken have dogged sailors for centuries

In Nordic folklore, the Kraken is shown to be a brutal beast, attacking ships and eating the crew. It would attack by using its tentacles to try to capsize the ship, but it could also swim in circles at great speed, creating a sea storm around the ship in order to sink it.

He claimed that the first type, the Kraken octopus, had been seen by Norwegian sailors. The second type, the colossal octopus, was larger and had been alleged to have attacked a fishing boat near Angola.

The giant squid was not proven to exist until 1857, by which time de Montfort was dead. It is possible that his sources had been describing the giant squid, if not the fantastical Kraken.

Over the years, many sailors have reported seeing Kraken in the ocean, but these tales have not been corroborated.

Scientists have undertaken many expeditions in an effort to find one of these legendary sea monsters, but it wasn’t until 2004 that photographs were finally taken of a supposed Kraken.

Japanese scientists attracted a giant squid with bait, their automatic cameras taking hundreds of photos of the creature before it tore itself free, leaving an 18-foot tentacle behind.
Aside from this, the giant squids found have been dead. There is still much debate about how big one of these creatures could get.

Witness reports and sucker marks on whales would seem to indicate that Kraken could exist, although most scientists remain skeptical.

In 2012, an ocean researcher and marine biologist called Edie Widder filmed what might be a Kraken. The footage was taken some 2000 feet below the surface of the Pacific Ocean.

Giant squids certainly exist, but could this be proof of the existence of the Kraken? The only reason we know the giant squid exists is because they sometimes float to the surface when they die.

As Edie says, we have only managed to explore five percent of the oceans, so who knows what lies beneath?
Many deep-sea squids are red in color, but this one was a striking mixture of silver and gold, lending credence to the idea that there could be many species we have yet to encounter.

In 1978, the American Navy vessel USS Stein began experiencing increased sonar noise, which was affecting operations. When the crew examined the sonar dome, they discovered a series of cuts and scratches that appeared to have originated from the claws found on the tentacles of the giant squid.

However, all documented specimens of giant squid claws were a fraction of the size of whatever attacked the Stein, which led to speculation that the ship had a close encounter with a Kraken.

https://www.usni.org/magazines/naval-history-magazine/2022/august/usos-not-ufos-have-been-greatest-threat-navy, “USOs Not UFOs Have Been the Greatest Threat to the Navy,” accessed January 26, 2023.