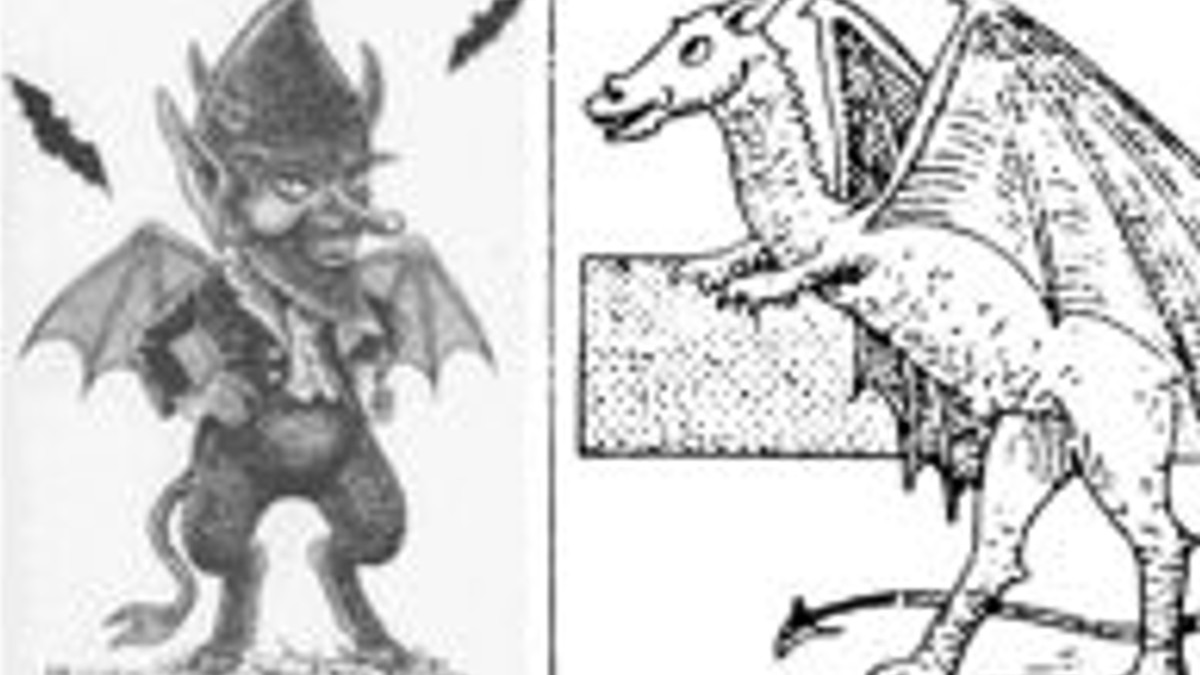 The Jersey Devil is a legendary creature and one of the world’s best-known cryptids. New Jerseyans have told tales of a cloven-hoofed creature with wings and horns for almost 300 years.

The creature’s homeland has traditionally been in the wooded areas of Pine Barrens in the southeast of the state. However, over the years, it has been spotted the length and breadth of the state all the way up to the border with New York.

The Jersey Devil has become a massive part of Jersey’s culture, history, and folklore. Even their beloved hockey team is named after the mythical creature.

Alleged to roam the Pine Barrens of New Jersey, the Jersey Devil has become entrenched in the lore of the area.

The legend stems from supposed events in 1735. A Pines resident known as Mother Leeds fell pregnant for the thirteenth time. She and her husband were not wealthy by any means, and her husband was a drunk.

Mother Leeds, reaching the end of her tether, uttered words to the effect of “let this one be a devil.”

Mother Leeds duly went into labor, and the child was born. To begin with, the baby seemed perfectly normal, but after a few minutes it reportedly began to transform before the witnesses’ eyes.

It’s said the baby began to grow horns, and talons sprouted from the ends of its fingers.

The legend says that the creature then grew wings, hair appeared all over its body, and its eyes shone bright red.

The hitherto beautiful baby had turned into a hideous, huge monster.

The Devil then killed its mother and tore the midwives to shreds, maiming and killing some of the other onlookers.

Upon completing its murderous rampage, survivors attested that the creature flew out of the house and made for the desolate Pine Barrens, where it is alleged to have lived ever since.

There’s more than one origin story for the Jersey Devil

However, there are at least two other conflicting legends for the beast’s origin. Another tale states that during the Revolutionary War, a town cursed a young girl who had fallen in love with a British officer, causing her to give birth to the Jersey Devil.

A third story told of a gypsy woman who cursed another pregnant woman after she refused to give the gypsy any food.

Either way, it is clear that the monster was born from a human woman.

Descriptions of the Jersey Devil

The beast is said to be taller than a man, with powerful haunches like those of a goat. It has also been described as having a human-looking torso and an enormous, hairy head — although descriptions vary greatly.

In the decades that followed, locals have reportedly heard bone-chilling wails coming from the Pine Barrens. Brutally slaughtered animals were thought to be the work of the Jersey Devil.

The Devil has been blamed for many ills that occur within the state; if the crops fail, it’s the Devil; if there’s flooding, it’s the Devil. The monster was also thought to foretell impending disaster.

Others have said the Jersey Devil appears at regular intervals every seven years. If you do happen to see the creature, you are likely in big trouble because it often attacks with great violence and ferocity.

There have been numerous sightings of the Jersey Devil since the 18th century by all sections of society, from poor farmers to the wealthy and the famous. Joseph Bonaparte, the brother of Napoleon Bonaparte and former King of Spain, allegedly saw the creature in Bordentown, NJ.

American naval hero Commodore Stephen Decatur also encountered the beast in the 19th century at the Hanover Mill Works. He fired a cannonball directly at the Devil, but it ran away uninjured.

The Jersey Devil consorted with all sorts; it was seen with a mermaid in 1870 and supposedly had a ham and egg breakfast with a Republican politician.

One week in January 1909 saw a frenzy of what was thought to have been Jersey Devil-related activity. Strange tracks were found in the snow. These prints went over and under fences, through fields and yards, and even across the roofs of houses.

The cities of Camden and Philadelphia also began to report similar findings, so panic began to spread. This panic was heightened when bloodhounds refused to follow the trail of this mysterious creature in Hammonton.

Eyewitness accounts began to emerge, with the beast seemingly attacking people in various locations. Local police fired at it but could not bring it down.

The residents of Mays Landing reported unidentified screams in 1960. These screams were bloodcurdling, and although the police investigated, no explanation was found.

In 1972 Mary Ritzer Christianson saw what may have been the Jersey Devil. She was driving from Blackwood to Glassboro when she saw a huge, winged creature crossing the road behind her car. The creature was only about 25 feet away, and she was able to make out its thick haunches and hairy head.

In 1993 a forest ranger named John Irwin was driving alongside the Mullica River in New Jersey. He found the road ahead blocked by a strange creature. This beast was about six feet tall, with horns and black fur. He said he and the creature stared at each other for a few minutes before it bounded off into the forest.

Two women said they were threatened by a creature while they were canoeing. The women had come across a bag that had been ripped apart. While they were investigating, they found what seemed to be oversized horse hoof marks on the ground.

Shortly after this, they heard an otherworldly cry that seemed to be filled with hate. They hastily beat a retreat, but the creature followed them. They kept hearing it behind them as they frantically canoed along the river and returned to their vehicle.

Making it back safely to their vehicle, they threw their things into it and drove away as quickly as possible. As they passed a cottage, they saw another woman standing outside it. Her skin was torn, and she was bleeding. Mysteriously, she suddenly vanished into thin air.