Video depicting what many are calling the “Chinese Nessie” has surfaced and is making rounds on social media
Photo Credit: The Sun

A video of the ‘Chinese Nessie’ was first uploaded on Sina Weibo, a microblogging site, and its since been making rounds on various social media platforms and has people wondering what on earth it is.

A tourist captured the footage while visiting Kanas Lake in the Xinjiang Province of China. In the video, a large, dark mass is seen moving slowly beneath the water and creating waves on the surface. Since the video’s upload, the internet is buzzing with speculation that the supposed creature in the video is the Lake Kanas Monster, which is also known as the ‘Chinese Nessie’.

Stories of the monster started circulating after the first official reported sighting in 1980. The sighting was reported by Guangming Daily, which is state-run, which means the government was okay with the report being published and given to the public. It would be the equivalent to the U.S. Government putting out information on Bigfoot sightings, so naturally the Chinese people went nuts andKanas Lake has since become a very popular tourist location.

However, long before any news reports there have been local stories that go back centuries telling of large creatures that inhabit the lake. People say that from time to time, the monster surfaces, drags horses into the water and eats them. 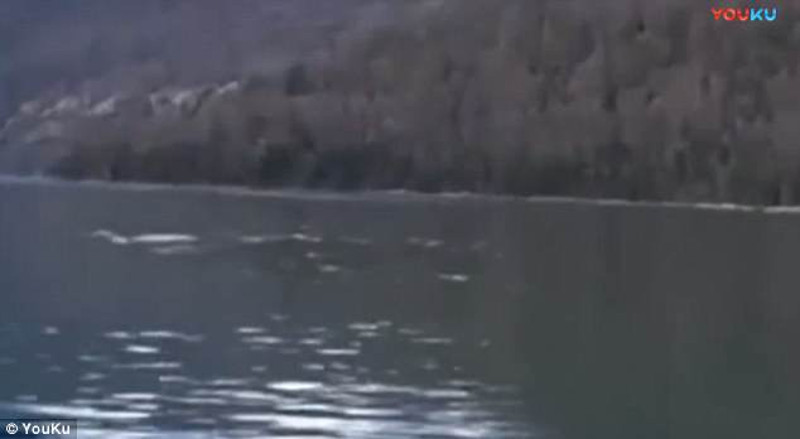 A still image of the large, shadowy creature captured on film at Lake Kanas in China

So, what is the “monster”? One study, conducted in 1985 by Xinjiang University concluded that there are, in fact, creatures inhabiting the lake that are 10-15 meters in length and weigh approximately 4 tons. But, they’re a type of very large fish, not a monster.

Some people have speculated that the “Chinese Nessie” may be a Siberian giant trout, which is native to the area. However, the trout only reach 6.6 feet (2 meters) long. That’s not quite big enough, given that the creature in the video is estimated to be 33 feet (10 meters) long.

Kanas Lake is 390 feet deep, meaning that there is plenty of room for speculation about what might lie in its depths. Though perhaps they will take a lead from scientists in the UK who announced the other week that they are doing an eDNA analysis of Loch Ness, which might turn up data on its famous monster.