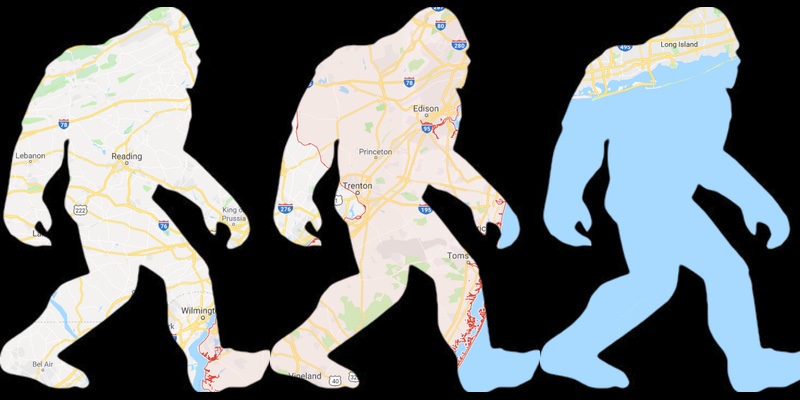 Bigfoot sightings have been on the increase in New Jersey

A recent Bigfoot sighting in New Jersey that was submitted to submitted to BFRO (Bigfoot Field Researchers Organization) has garnered a lot of media attention.

The witness said she had been driving with her husband along the northern section of the Brendan T. Byrne Forest on St. Mary’s road, when it came to a dead end with a path and a pond. They thought it looked like a scenic spot to walk, so they stopped, got out and walked their dog. They went up the path a little way and started smelling something musty and mildewy. Alarmed by the smell, they went back to the car. As they drove off, she saw a creature in the rear view mirror. She said it was bipedal, approximately six feet tall, thin and covered in brown hair. They backed up and went back to the area they had just been in and heard branches snapping and splashing as if something had gotten in the water.

So, this seems like any other Bigfoot story right? But, it’s really not. Very shortly after the sighting was submitted, BFRO investigators, Eric Spinner and Art Mack interviewed the witness and her husband. Both investigators found them to be credible witnesses. Furthermore, Spinner says the witnesses weren’t in the area looking for Bigfoot. It’s unusual for a report to come from seeing the creature in the rear view mirror, as well.

Spinner has been interviewed a few times in reference to this sighting with the story being picked up by the New York Post, which was, admittedly very critical. But, some would say that any press is good press. It’s drawing light to the fact that there have been lots of Bigfoot sightings in New Jersey reported to BFRO. If you think about it, woods in New Jersey are an ideal location for a cryptid. There’s lots of food, there’s water, and there’s plenty of places that a cryptid could find isolation. The BFRO thinks that’s why there have been 68 sightings in New Jersey, some of which date all the way back to 1966.

New Jersey is not alone in seeing a rise in sightings, with several reported earlier last year in California…including one where a Bigfoot reportedly tried to steal a pig.

Want more Bigfoot? Here’s a list of Bigfoot sightings from around the world this year and check out our own entry on Sasquatch for more information.