The famous “surgeon’s photograph” of the Loch Ness Monster, which was found to be a hoax

Two new videos that are reportedly of the Loch Ness monster have surfaced, within weeks of a scientific study that is scheduled to take place at the Loch to determine if scientists can gain any sort of DNA evidence to prove that the beast resides there. Scientists are set to do environmental DNA analysis (eDNA) later this month.

Besides trying to find the elusive monster, the results should paint a picture of what the ecosystem in the Loch contains and can also tell scientists if there are any invasive species in it.

The first video comes from Eoin O’Fadhagain. Eoin watches the webcam stream of the Loch and says that it’s often better than watching TV. One day, as he was watching the stream, he saw something swimming toward Urqhart Bay. He took out his cell phone and recorded the stream. The result was nearly 10 minutes of footage of what he thinks is the Loch Ness monster.

The 2nd video came from an 8 year old girl named Laria Annand. She had been visiting the Loch with her grandmother, Marie, when they noticed something unusual moving in the water, along the shore opposite them. Marie started fumbling around with her phone to get a picture, and then Laria used it to capture the video. Two things lend some credibility to this particular sighting: 1) there were no boats or people in the water and 2) Marie is a school teacher from Inverness who has no real reason to make up a story about the Loch Ness monster. (If anything, she could get ridiculed.)

But,  it’s safe to say that many people are eagerly awaiting the analysis of those DNA results! 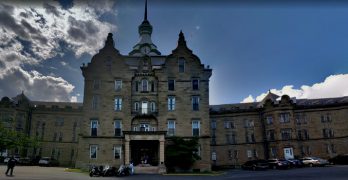